Renewables grow by 10% in Spain

The renewable energy sector in our country grew last year by more than 10%, contributed 10,521 million euros to the Spanish GDP and provided jobs to more than 81,000 people, which means an increase in employment rates of 3.3%.

In total, renewable energies accounted for 15.1% of the energy used in Spain in 2018, according to the Study of the Macroeconomic Impact of Renewable Energies in Spain prepared by the Association of Renewable Energy Companies (APPA).

The mini-hydraulic gets a boost

Looking at the balance sheet in terms of technology, we see that minihydraulics has gained momentum again, with figures that had not been seen for 5 years. This is the data of the sector in figures: 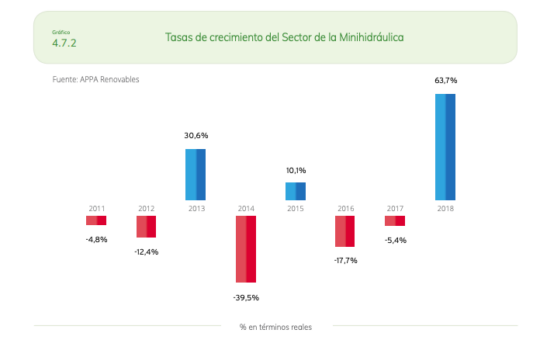 Will the objectives of the Renewable Energy Plan be met?

However, there is still some way to go to reach the objectives set by the Renewable Energy Plan. According to this document, 188 new MW should be installed by 2020. But since 2011 only a total of 63 MW have been installed. Why has this delay in mini-hydro power occurred? The study points to 5 main causes:

What can the government do to increase the capacity of the mini-hydraulic? To begin with, convene our power auctions. To this we must add the maintenance of the supports, the introduction of changes in administrative procedures and the implementation of measures to encourage the rehabilitation, modernization or replacement of equipment in existing plants.